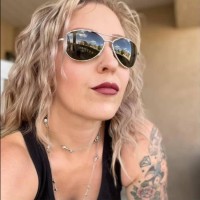 Hi, y’all!  My name is Rachel, and I was born in rural south Arkansas to an extended family of musicians and hobby crafters.  My interest in the arts began at a young age.  My dad, a welder and mechanic by trade, uses his torches and welding equipment to make art pieces from scrap material.  My mom and grandmothers have honed a number of crafts over the years including sewing, embroidery and ceramics & wood painting.  My grandfathers are guitar players and woodworkers.  By middle school, I had amassed quite the collection of hand-me-down art and craft supplies, and my obsession was born.

At the age of fourteen, I participated in my first talent competition, singing a country number I have long since forgotten.  (Side note — I don’t actually like country music!)  To the surprise of my parents, and me to be honest, I won the competition, which opened up a whole world of opportunities following in my musician family’s footsteps.  My parents invested in sound and lighting equipment, and I began spending my weekends and summers traveling between Arkansas and the surrounding states providing entertainment for festivals and live “hayride” shows.  At sixteen, my parents and I expanded the business to include deejaying for weddings, parties and corporate events.

At twenty-one, I left south Arkansas for Nashville, Tennessee.  While visiting the city earlier that summer to perform at a music festival, I was offered a job as a singer in a renowned bar in Printer’s Alley.  I made a living performing on stage for the next four years, before deciding to complete my higher education, earning a Baccalaureate Degree in Computer Science. My work as the lead software engineer and now product manager of a web based incident reporting system has taken me around the world and back, including three volunteer deployments to Iraq and Afghanistan in support of OIF and OEF-A. I have since planted my roots in the Washington, D.C. metro area.

I always felt that developing software was, in and of itself, a creative avenue, a challenge to build something out of nothing.  But as my career advanced, it morphed into a more managerial role.  While I certainly appreciate the recognition and the opportunities my company have given me, it left me with a feeling that something was missing.  I was missing creative expression.  The hobbies and crafts I was so enamored with as a child began to allure me once again.

In 2011, I happened upon a pin on Pinterest that caught my eye — a cookie that looked like a slice of pizza.  Within a week, I was standing in my own kitchen, sugar cookies piled in front of me and brightly colored icing splattered all around.  I began sharing my cookie creations with friends and family, and before long, word got around to their friends and neighbors.  The seeds for a future business were planted.  I soon started experimenting with cupcakes and cakes, even making the desserts for my own wedding in 2012.  But my biggest break came in 2013 when my brother, Rob, asked me to make his wedding cake.

Rob’s wedding was a regal affair, much more elegant than my beach-themed, casual reception the year before.  The colors were black and white with accents of red.  I designed a cupcake tower accented with damask patterns with a simple cake on top for cutting — white, fondant-covered, wrapped in black silk ribbon and topped with red roses.  But I wanted to make this one extra special.  Rather than using fresh flowers, I vowed to make them entirely of sugar using a medium called gumpaste.  The final cake was a stunning success, and the seeds for Smart Cookie Sweets had officially bloomed.

In 2015, after two more years of learning and practicing the craft, my husband, Chris, and I moved eight whole miles from Maryland to Virginia.  Virginia has some of the most lenient cottage food laws in the country, which allows me to bake and sell my cake, cupcake and cookie creations from my home without the need for expensive licensing and inspections.  While I spend my days in the corporate world of software development and management, my nights are filled with sugar and spice.

Of course, baking and sugar crafts are not my only artistic endeavors these days.  Photography has been a staple of life since getting my first SLR film camera as a graduation gift many years ago.  You’ll often find me painting with oils alongside old Bob Ross episodes, or knitting scarves and crocheting blankets while watching movies with Chris.  When I’m not writing code or baking cakes for either of my two jobs, I’m often scouring the internet for fresh ideas and researching the basics of potential new projects.

And that leads us here, to Rachel’s Creative Adventures.  Online resources such as blogs and YouTube provide a wealth of information on an unimaginable number of topics.  I’ve always laughed about the fact that I learned how to apply false eyelashes thanks to a YouTube video years ago.  And since I’ve learned so much here on the World Wide Web, I want to give back to the community.  I hopes this space can serve as a forum to teach the crafts I’ve mastered, but also to allow others to learn along with me as I tackle new ones.

There will be trial and error.  There will be lessons learned.  But many of us learn by doing.  I hope you’ll join me on this creative adventure.  Who knows what treasures we will find… or create!